What do You Know About Human Trafficking and Contemporary Slavery? 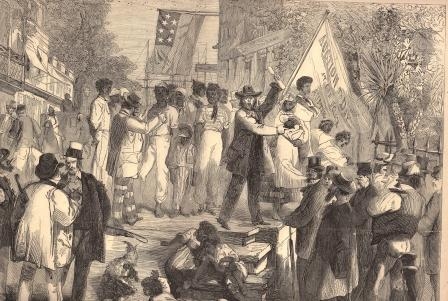 Slavery is a part of our history, but has never disappeared. Instead, it has taken a different form. An increase in world population and global traveling, as well as rapid social and economic changes have made moving people around the world easier, but have also changed historical slavery into a different, contemporary form. 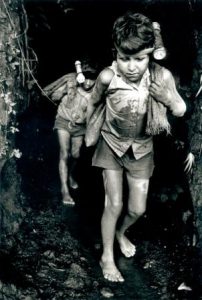 Human trafficking is the modern form of slavery and involves the movement of people by means of violence, deception or coercion for the purpose of forced labor, servitude or slavery-like practices. Today, human trafficking is the second largest criminal industry in the world after drug dealing. It is also the fastest growing. Traffickers generate billions of dollars in profits every year while victimizing millions of people around the globe.

Far from having disappeared, perpetrators of trafficking and forced labor are victimizing over 20 million human beings globally. Within the United States, 100,000 children are trafficked each year.

In addition to forced labor practices, worker exploitation and specifically, child labor exploitation victimizes over 214 million children globally. Seven out of 10 of these children are working in agriculture, and 126 million are laboring in hazardous conditions.

Download our Human Trafficking Fact Sheet PDF to share with your school or organization and explore the following sections to learn more:

Many trafficking victims are exploited for purposes of commercial sex, including prostitution, stripping, pornography and live-sex shows. However, trafficking also takes the form of labor exploitation, such as domestic servitude, sweatshop factories, or migrant agricultural work. Human traffickers are slave traders. They deceive their victims by offering the victims a better life, employment, educational opportunities or marriage.

The Three Faces of Slavery: 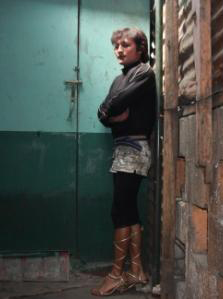 The recruitment, harboring, transportation, provision, or obtaining of a person for the purpose of a commercial sex act, in which a commercial sex act is induced by force, fraud, or coercion, or in which the person forced to perform such an act is under the age of 18 years. Victims of sex trafficking might end up working in brothels, “escort” services, unlawful massage businesses, strip clubs or simply in street prostitution. The phenomena of “Sexual Tourism” involving the exploitation of children is also an increasingly-prevalent crime in Asia, Africa, and Central and South America. 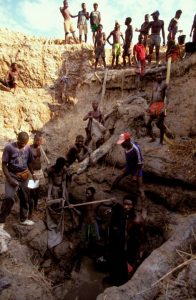 The recruitment, harboring, transportation, provision, or obtaining of a person for labor or services, through the use of force, fraud or coercion for the purpose of subjection to involuntary servitude, peonage (debt-servitude), debt-bondage or slavery.

Organ Trafficking and Others:

In addition to these 2 predominant types of human trafficking, some types involve individuals being victimized for their valuable organs and/or tissues. Kidneys, in particular, are in very high demand in the organ trade. A person might have been offered money in exchange, yet payment was never received, or in other cases, an organ is removed without permission during an unrelated medical procedure. More types of trafficking that exist include forced marriage and child trafficking for adoption which is also known as “child laundering”.

Although trafficking and smuggling are both profitable crimes involving the movement of human beings. The two crimes differ in many ways. In some cases, a trafficking victim might start out believing that they are willing participants in a smuggling agreement, only to discover that they have unwittingly become entrapped in a form of slavery.

What if the victim consents?

If coercion, fraud or deception has been used, any consent is irrelevant. In addition, children under 18 years old cannot give a valid consent. Therefore, any kind of recruitment, transportation, transfer, harboring or receipt of children for the purpose of exploitation is a form of trafficking.

Resources: United Nations Office on Drugs and Crime – How is Human Trafficking Different from Migrant Smuggling?

Slavery: state of control of one person over another through violent means; lack of payment beyond subsistence; and theft of labor that results in economic gain for the enslaver.

Sex Trafficking: the recruitment, harboring, transportation, provision, or obtaining of a person for the purpose of a commercial sex act.

Commercial Sex Act: any sex act on account of which anything of value is given to or received by any person.

Involuntary servitude: any condition of servitude induced by means of

(a) any scheme, plan, or pattern intended to cause a person to believe that, if the person did not enter into or continue in such condition, that person or another person would suffer serious harm or physical restraint; or

(b) the abuse or threatened abuse of the legal process.

Debt bondage: the status or condition of a debtor arising from a pledge by the debtor of his or her personal services or of whose of a person under his or her control as a security for debt, if the value of those services as reasonably assessed is not applied toward the liquidation of the debt or the length and nature of those services are not respectively limited and defined.

Coercion: (a) threats of serious harm to or physical restraint against any person;

(b) any scheme, plan or pattern intended to cause a person to believe that failure to perform an act would result in serious harm to or physical restraint against any person; or,

(c) the abuse or threatened abuse of the legal process.

The definitions in this section are from the United States State Department’s Trafficking in Persons Report 2003 and US Code Title 22 Section 7102 Chapter78 – Trafficking Victims Protection.

The Victims of Human Trafficking

According to the U.N., every year, hundreds of thousands of victims are trafficked across international borders world-wide. 80% of these are women and 50% are children. Globally, it is estimated that there are over 20 million people living in slavery of some form. Poor and indigenous peoples are the most vulnerable victims of human labor trafficking.

Regarding sex trafficking victims, in America alone, there are nearly 3,000,000 adults and 100,000 children who are forced to work as prostitutes. The average age when a girl enters prostitution is 13. The National Center for Missing & Exploited Children estimates that one in six endangered runaways are likely victims of sex trafficking.

Who are the victims, and how does ITEMP help?

ITEMP provides medical, psychological, legal, social, shelter and education services to victims and their families. ITEMP has a current operating focus in Guatemala, and the USA, with past human trafficking / forced labor research activities in several countries in Asia.

Your support is vital! Donate today.

The Human Toll of Trafficking and Slavery

Violence is often involved in human trafficking and victims are often subjected to debt-bondage — usually under the pretext of an exaggerated debt that resulted from transportation fees and food costs. Traffickers often threaten victims with personal injury or death, or the safety of the victims’ families back home. Also, traffickers commonly take away the victims’ travel documents and isolate them to make escape more difficult.

Why is Trafficking and Slavery Still Happening?

Poverty and inequality are important factors in making people more vulnerable to being trafficked but are rarely the primary causes. Corruption of public officials is crucial to the continued existence of human trafficking. Without the complacency and/or participation of government officials or law enforcement, traffickers could not operate.

Most importantly, trafficking is a criminal industry driven by 1) large profits and 2) the low risk of prosecution. As long as the demand is high and the risks are low, trafficking will exist regardless of other contributing factors.

Human trafficking is now the 2nd largest criminal industry in the world.
It is also the world’s fastest-growing crime.

WHY IS HUMAN TRAFFICKING GROWING? 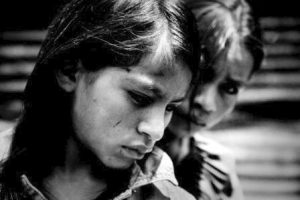 HOW TO COMBAT TRAFFICKING

Where is Trafficking Happening?

Human trafficking is a global problem, but most people are shocked to learn that it is also happening within their own neighborhoods and home towns in America. Individuals are trafficked in virtually every state of the U.S. for the purposes of agricultural forced labor, domestic servitude, “mail-order-brides”, and as sex workers.

Trafficking Routes Into the United States 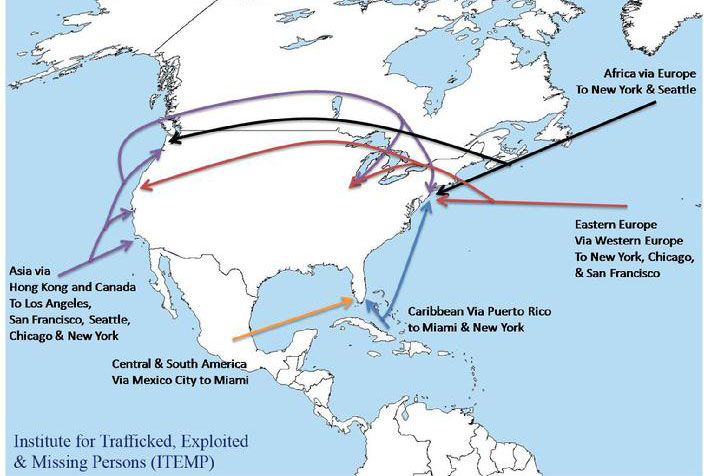 This map (North American trafficking points of entry) was created by ITEMP personnel from information in Richard J. Estes and Neil Alan Weiner’s 2001 study, The Commercial Sexual Exploitation of Children in the U.S., Canada and Mexico. The map indicates typical points of entry, for traffickers and victims, into the United States.

The following Global Trafficking maps were created by ITEMP personnel after analyzing information from the United States Department of State.

The arrows represent Typical Trafficking Patterns. Following the development of common route arrows, ITEMP personnel then cross-referenced the data with the 2009 World Bank Country Classifications for Gross National Income (GNI). A clear pattern arose where the Typical Trafficking Patterns moved from Low Income countries (those with a GNI below $976) to high income countries (those with a GNI over $11,906).

The close correlation between the Typical Trafficking Patterns and the World Bank Country Classifications indicates that economic necessity is driving trafficking. 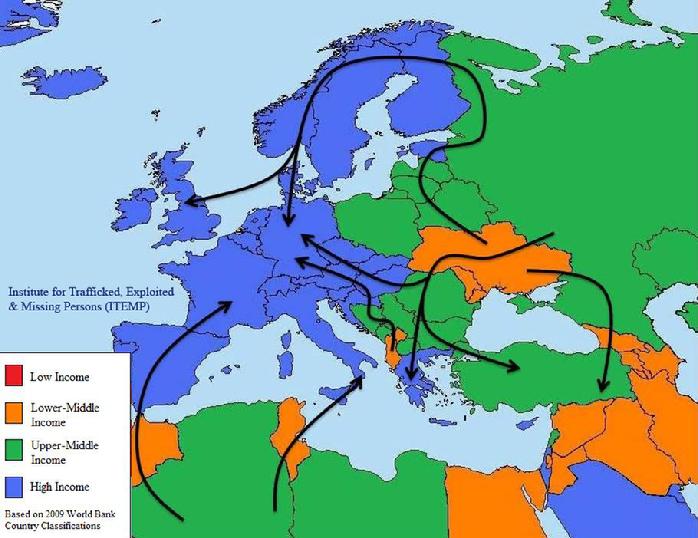 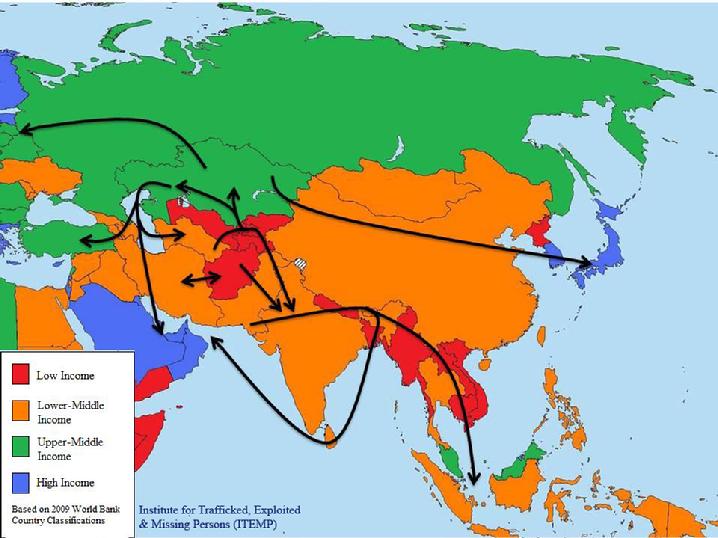 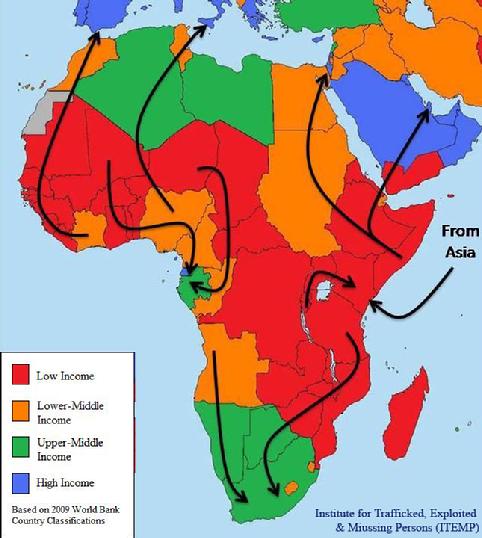 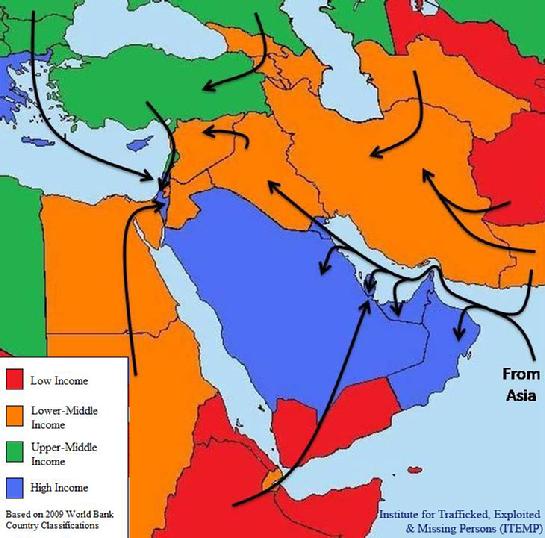 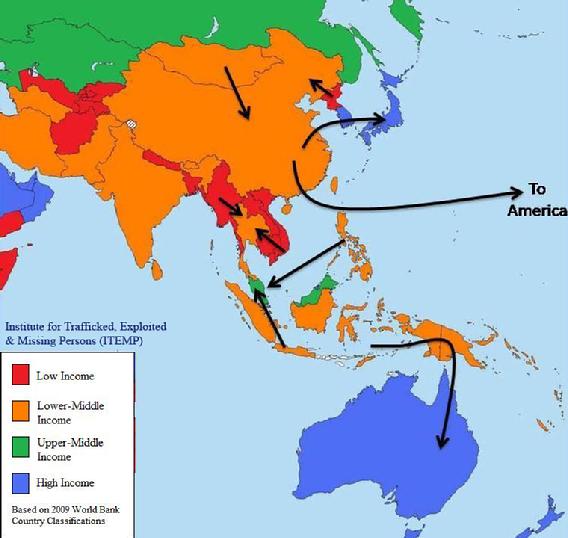 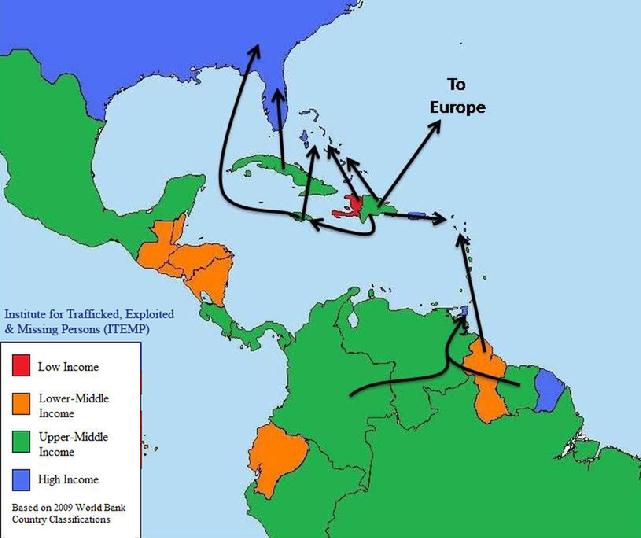